From the Chaplain's Desk

When Brookville City Police Chief Douglas Jerome decided to reinstate the Police Chaplain Program in the spring of 2012, I commended him on the decision until he said I was being considered for the position. My immediate thought was that there are literally a hundred different ministers that are better qualified than I.  Stunned, I simply asked the Chief If I could pray about it and I would get back with him. I had been in youth and children’s ministry for several years, but struggled with the thought of taking on such a public position. Like so many others, I still struggle with things that I know I shouldn’t and when I think of the pastors, I know I would never count myself in their ranks. Simply put, I knew that I was not worthy of such a title and felt that my fellow officers would surely agree.

After spending several days and nights in prayer about the decision, the answer finally came. The Holy Spirit simply reminded me that he does not call the qualified, but qualifies the called. I knew then that I was still not worthy of such a position, but from that day forward, I have given it my very best and always seek God’s guidance in everything I say and do.

After advising the Chief that I would accept the position, I was soon appointed. When I asked him why he chose me he said something that had never crossed my mind. I was chosen, not because I was the most qualified, but because in the event of a crisis, I can relate to the officers in ways other faith leaders could not. In my twelve years in law enforcement I have experienced firsthand the things that weigh on an officers mind. I can truly say that I know what you are going through because I have been there. I know the weight of the badge and how it affects the officer, the family, and the ones you love. If I can use the things that keep me up at night to help other officers or those who are broken or hurting… then here am I Lord…send me! 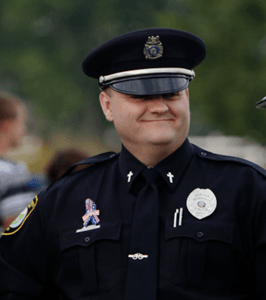